Shoshana and I went out to dinner and randomly stumbled upon a spiked lemonade tasting, so obviously we participated.

In another installment of the belated birthday celebration, Shoshana took me out for dinner! We met in downtown Culver City for dinner at “Sweetgreen,” a salad bowl place. I’d had it once before and it was great, so I was very excited to go again! It’s very fresh, healthy and filling! Definitely recommend you check it out.

Then it was time for some dessert, so we walked over to “Cool Haus,” a gourmet ice cream shop. As we were walking in, Shoshana and I were having a conversation about a friend of mine who recently bought a house. The guy behind the counter, who was probably about 20 years old, said “no way!” in a joking matter. We chatted with him as we tried some flavors. As it was time for us to pay, Shoshana offered to buy mine, and i made the following joke: “See, but this is a HAUS I can afford!” He gave us one of the ice creams for free. WIN!

After stuffing our faces, we wandered back to the center of downtown and saw that there were a bunch of restaurants sporting balloons. We walked up to one of them and found out the city was hosting a spiked lemonade tasting–for free! About 25 different establishments were serving up samples of their own take on the lemonade. We tried only five, as we got there late, but it was a ton of fun (and very tasty)! 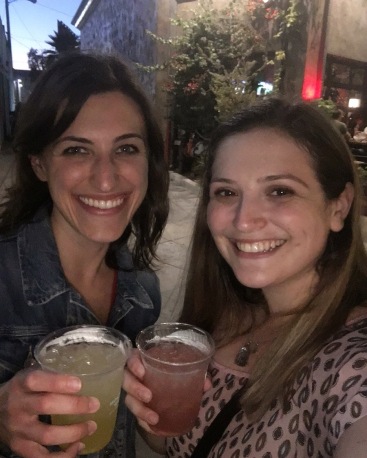 Shoshana with turmeric lemonade, and me with watermelon mint!

We’re definitely on the hunt for similar (free) events in LA, so hopefully I find some cool ones when I return from Italy (T-minus three days)! Stay tuned, my friends!