If you haven’t read part 1 of my time in Belgium, CLICK HERE to read it first. Not that you really need to read them in order, but I think it would be cool if you read my posts in the order that I experienced them. Make sure to check out all of the photos I’ve been posting HERE. Okay, here we go. Day 2 in Belgium!

When I was planning this trip originally, I knew that I wanted to see the town of Bruges, Belgium, even if just for a day. I’d heard that it was like a fairytale. How could I not go see it? Sandeman’s, the same company whose walking tour I did the day before, had a fairly inexpensive day trip to Bruges, which included transportation and a guided walking tour. I booked it months ago, and when I told Susan and Rana, my friends I met yesterday, about it, they decided to join me last minute! So the three of us met in the lobby that morning and headed back to the Grand-Place, the meeting for the tour! They told me about how the night before, one of the guys in their room came back so drunk that he began peeing everywhere! Susan had to rush to move their bags out of the way to avoid getting soiled. What a nightmare! And here I was about to complain that one girl woke up at 6:30 and opened the curtains to the very bright morning. Counting my blessings over here.

Our guide today was Senna, a Flemish Belgian (meaning he was from the Dutch part of Belgium, as opposed to the French part).

We arrived a bit early, and started talking with another person who was joining us on the tour. His name was Bryan, and he was a solo traveler from Vancouver. We took a one-hour train ride into Bruges. I sat next to Susan, and we talked nonstop the entire ride, from our families to past travel experiences. 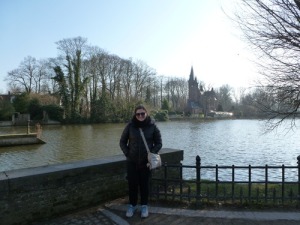 Finally, we arrived in Bruges! And it was exactly how I imagined: so cute! I said that many times during the tour. It was just such a cute town!

Senna was a very interesting guide. He knew a lot about the history of Bruges and was also able to keep us captivated. There were only 11 of us on the tour, so it was easy to keep us all gathered in one place.

Again, you know me and my lack of remembering history, particularly when I visited a few days ago by the time I’m writing/you’re reading this. So I’m just going to talk about my time there and let you go and visit to hear the history yourself.

We luckily had a beautiful day, despite the cold, so we enjoyed walking in the sun for the majority of the tour. Bruges was kind of what I expected Brussels to be like: more quaint and along many canals. Not that I was disappointed with Brussels, it just was different than what I had been expecting. To be honest, I’m not even sure why I chose to come to Belgium, but I’m really glad I did!

After walking around for an hour, Senna gave us all an hour for lunch. He was going to a restaurant that served inexpensive but large portions, and also had beer from Bruges. Rana, Susan, and I ended up joining him.

We all ended up just getting spaghetti bolognese for only 4.50 Euros. There was so much, I couldn’t finish! I also enjoyed a blonde beer. Yes you read that right: I ENJOYED it! It was actually very good! I can’t really describe it for you, but below is a picture, so go and look it up yourself. If you’re not a beer lover like me, you will probably like this one too! 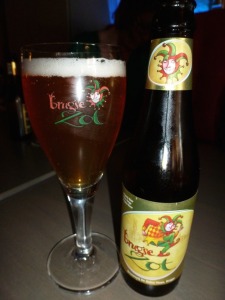 We talked to Senna about his experience growing up in Belgium and what it’s like to be a tour guide. He was a really nice guy, and a great guide too! After lunch, we headed back to the main market square in Bruges.

Now I didn’t mention this before, but over the summer, I watched a movie called “In Bruges,” starring Colin Farrell and Ralph Fiennes. While it wasn’t my favorite movie, it was cool to see all of the things I remembered watching come to life before my eyes! Maybe I subconsciously chose Bruges because of it? Who knows.

We walked around for another hour and a half before we headed back to the train station to go back to Brussels. I definitely could’ve stayed in Bruges for a night. I feel like there was a lot I didn’t get to see, most notably being going to the top of the Belfry. But I was glad to have spent some time there, and maybe I’ll return again. One more photo for the road: 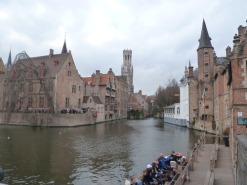 When we got back to Brussels, Rana, Susan, Bryan, and I all headed to find an authentic Belgian waffle. Senna told us that the ones we’d tried yesterday were not good, and that is why they cover them in lots of toppings. He pointed us in the direction of the Opera House, where Belgians go shopping, and that is where you can find good, cheap waffles. We found some for 2 Euros and ate them plain. They were delicious!

We all headed back to the hostel (Bryan coincidentally was staying there as well) and rested for a few hours. I actually saw a girl wearing a Cal Poly SLO sweatshirt and immediately approached her. Her name was Zoe, and she was studying abroad for the semester in Galway, Ireland. She was visiting for the weekend. We talked about life in SLO and how much we both enjoyed Cal Poly. Such a fun and random coincidence!

After our rest, Rana, Susan, Bryan, and I were going to meet up and go to dinner at a restaurant Senna recommended that served traditional Belgian food. Unfortunately, we all ended up running a bit late, mostly due to Rana and Susan’s shower door breaking! Luckily, they were right next door to my room so I let them use my shower. So crazy, the bad luck they had that day!

Bryan brought us all some beers to Susan and Rana’s room, and we drank them while getting ready to go. This one was not very good. Too college-like for my taste. Don’t really know how else to describe it. But we all talked and had a lot of fun. We set out for the restaurant, which was in an area none of us had been to before. It was pretty cool to explore a new part of the city, particularly not alone at night. This time, there was no harassment, probably due to Bryan being there with us!

We arrived at the restaurant only to find out it had just closed! Such a bummer. We walked towards this famous bar that we had heard about, called Delirium, thinking that there was probably some restaurants nearby that were still open. Right next to the bar was a frites stand, the one that Charlie, our guide from the day before, had said was favorite frites in the city. They fry them in beef fat. So, we once again decided to skip out on actual dinner and just have fries. Oh well. They were really delicious, and I got mine with a sweet curry-like dipping sauce.

When we all finished, we headed to Delirium. It holds the Guinness World Record for the most beers. I believe it has over 3000 beers on tap! Insane! I ended up getting an apple beer from Belgium. It was really good, and tasted a lot like hard cider.

We found a table in the bar, and ended up seeing the owner from the pita shop the night before! So crazy! He was very friendly and gave us all hugs. We stayed for about 45 minutes (maybe longer, wasn’t really keeping track), just talking and sharing stories. The clock struck midnight, which meant it was Valentine’s Day. We all toasted to our singledom!

There were some creepy older guys at the table next to ours who kept eyeballing us. It was very uncomfortable. We ended up leaving at around 1am, partly to not be near them anymore and partly because we were all very exhausted from the day we’d had. So we headed back to the hostel. But first, we saw the female version of the Mannekin-Pis, called the Jannekin-Pis. It is supposed to represent loyalty and luck. You throw a coin into the fountain and make a wish. This city is just all about luck!

When we got back to the hostel, we all said our goodbyes. Rana and Susan were heading out early in the morning to go to Carnival in Cologne, Germany, and Bryan was leaving in the early afternoon, although he might be in Budapest at the same time as me! We all gave each other big hugs and headed off to sleep for the night.

So that was day 2 in Belgium! Hope you’re enjoying reading all about my travels, and also hope that this format of one post for every day is working out well for you. I just don’t want to make super long posts and people to get bored. Anyway, stay tuned for part 3!