The last time I was in France, about 5 years ago, my family and I visited Paris and small French cities along the Rhine River. However, one thing I had wanted to do that we didn’t have time for was visiting the Chateau Versailles. So on this trip, I’m making sure that I’m doing what I want to do, and I went to see Versailles!

When I woke up this morning, Lea had gone out and bought fresh bread for us to eat for breakfast. She also set up my ticket to the palace, so all I had to do was put in my personal information. So sweet of her! She had to leave for work, so we had to say goodbye. I packed up all of my stuff (since I would be going directly to the train station afterwards) and Deborah walked me to the subway stop. We parted ways for the day and I set out for Versailles!

I had to talk to a few people along the way to make sure I was going in the right direction. Not everyone spoke great English, so it was a little bit of a struggle. But I made it through and over an hour later, I arrived at the town of Versailles! There were many signs clearly showing the direction of the palace, so I followed those and walked towards the golden gates.

I was able to go right through the security check, since I bought my ticket ahead of time. Great! There was also a bag check for larger items. I walked up to leave my backpack, and the man was giving me a bit of a hard time, since it wasn’t technically luggage. I politely told him that there was only clothes inside and that it was my suitcase. After a bit more banter, he gave in and let me leave my backpack, thankfully. It would have been horrible to carry that around all day.

Finally, I got to enter inside! It was really beautiful from just the outside, so I could only wait to see the inside and the gardens! I walked straight up the center steps and began looking around. The woman who was standing in front of me was gazing longingly at the marble pillars, and getting extreme photo close-ups of them. I was utterly confused. I saw her do this a few more times throughout my tour. I also saw that there were anti selfie stick signs, yet many people still used them. Don’t know why they weren’t allowed…

After a few minutes, I realized that I had entered in the wrong way, as there was nothing that said “entrance” and everyone else had audio guides. Oops. I made my way through the wing I was in, and exited. Upon reentering the main square, I saw the big sign that said “entrance” and felt slightly stupid. Oh well. I grabbed the complimentary audio guide began the tour the way I was supposed to.

It was so beautiful inside! Wow! Now most of you who know me know that I’m not a big history buff, so regaling the history of the palace would not exactly be possible for me to do for you in this blog. Instead, I’ll show you a few photos I took (there are way more in my Facebook album, but the slow wifi makes it hard to post them into the blog posts themselves) and go a little into detail about my experience of touring alone.

I don’t think I’ve ever gone into a museum/exhibit/etc. completely on my own before. I’ve had at least one other person touring around with me. It was very interesting to just go at my own pace and listen to the audio guide explain the rooms and the history of the palace and the royal family. There were a few videos that played, so I watched those, but mainly I just walked around leisurely, not needing to keep up with anyone.

Now something I’d heard about was the marvelous gardens, so I was very excited to walk around and explore on my own. I handed back in my audio guide, as there wasn’t guidance through the gardens, and set out. It was an absolutely beautiful day, so I was very lucky.

However, before setting out that day, I knew that February would not be the best month/weather to go look at gardens. Everything was very green, but most of the statues were covered to be protected from the cold, the fountains were not running, and some areas were closed off. I still went in with a positive attitude though, and walked around. I popped in my headphones and listened to a podcast I was listening to called “Serial.” If you haven’t heard it, I highly recommend it. It’s extremely interesting. So I spent the next few hours just wandering around and basking in the sunlight while listening to this podcast.

I stopped a few times to rest on benches, as I really did do A LOT of walking around, and I stupidly chose to wear my boots instead of my tennis shoes. My new boots broke. Yes, the same ones that my parents JUST bought me a month ago. I was bummed, but figured that I’d probably get by fine on the rest of my trip with tennis shoes, Uggs, and rain boots. 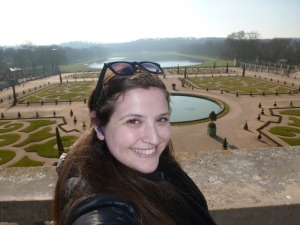 There were not too many visitors at the palace, so at many points, I found myself completely alone in the gardens, which was actually pretty cool. I was able to relax (well, not my feet) and take in the sights with a wonderful soundtrack. When the podcast was close to being finished, I started to head towards the exit.

I grabbed my backpack and went back to the train station to go to Paris. When I arrived, I was slightly turned around as to where I was. I started walking a bit and found a Starbucks. Ah, safe haven! Well, more like wifi haven, so basically the same thing, right? I bought myself a mocha and grabbed a table upstairs. Surprisingly, my name was spelled right on the cup! I know, I know. That doesn’t seem like a big deal, but I was in a different country! That’s gotta count for something.

I sat in the Starbucks for a few hours, grasping onto the wifi for dear life. Then a super-PDA (that’s public displays of affection, in case you were unaware) came in and sat down right next to me. Fortunately it was time for me to leave anyway, so I grabbed all my stuff and headed to the train station. I got there before Deborah, and when she arrived, we discussed our respective days with one another. She spent the day shopping and traveling all over the city to meet friends.

We arrived back in Geneva at around 10:30pm. I had gotten so hungry that I actually made myself nauseous. Not good. By the time we arrived at Deborah’s house for the night, all I was hungry for was toast. I ate a little bit and headed to pack up all my things and get ready for my early flight the next day.

So those were my adventures in Versailles, or pretty much the beginning of me traveling alone! Next up: Brussels! Stay tuned, and be sure to check out all of my pictures! There are many more on there that I couldn’t upload to the blog, I promise.