Okay, here is the final installment of my trip to Greece! It you haven’t already read the previous parts, for Part 1, CLICK HERE, and for Part 2, CLICK HERE. Are you all caught up? Great. Now continue reading down below. And again, for my full photo album, CLICK HERE.

We had a bit of an earlier day today, as we booked another exciting excursion: a guided food tour! As if we hadn’t tried enough traditional Greek foods, we were ready for more. The tour guaranteed trying traditional foods that were not so commonly known, so we were very excited.

We met back at the Monastiraki Flea Market entrance. There we met our tour guide, Diana. She was very nice and full of information about each of the foods we tried. The tour was small, only the two of us and a father-daughter duo from Australia (the daughter studies in Germany, though). Seeing them made me miss my dad and also thought about how much fun we would have had on the tour together (hi, fu). Okay, enough with being sad. Get ready to join me through this food tour. I’ll try to be as specific as possible, but keep in mind I’m not a food critic. 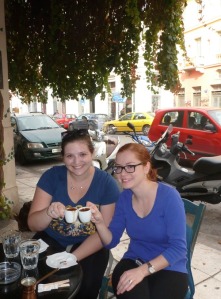 Greek coffee was great! As many of you know, I’m not a coffee fanatic, so me liking coffee was a big feat. I was told it is like Turkish coffee, pretty thick  and a little grainy. A little bit of a chocolatey taste, but I think Natalie disagreed on that part. Overall, pretty good. 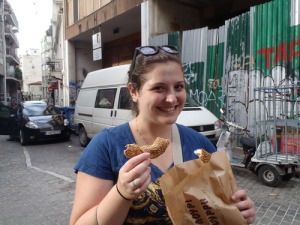 Koulouri is sort of like a ring-shaped sesame seed bagel. It is light and airy, and you can really taste the sesame seeds! It would have been really delicious with the coffee and/or some cream cheese, but a delicious breakfast. Two big thumbs up!

Bouratsa is phyllo pastry filled with cream and dusted with cinnamon and powdered sugar. The best way I can describe the taste is like a churro. It was awesome! The cream inside is not overly sweet and perfectly balances with the sugars on top. A really great sweet treat!

Elixir is not the name of a food; it is a giant spice shop in Athens. You walk in and are flooded with all sorts of amazing aromas. I did not purchase anything, but Natalie bought a kilogram of dried chamomile for only 1.20 Euros. A very cool store!

Miran is also the name of a store, a butcher shop. On the ceiling hang many plastic examples of the meats they sell. Very cool. We were able to try the 5 things featured on the platter (see above right photo). Starting on the bottom, we have buffalo salami. It tasted a little bit lighter than beef, but was overall not too salty. Going clockwise, on the top left, there is pastorma, which is cured and salted beef. It was extremely salty and I could only have half a slice. Not my favorite. Continuing clockwise, there is a goat’s milk cheese. I’m a huge cheese person, so obviously I enjoyed that one. It was like a mild cheddar flavor. Then there was some crunchy bread to sandwich everything up. In the middle, there are dolmas, or stuffed grape leaves. These ones were filled with rice and were great! I’m not usually a stuffed grape leaf fan, but the leaves themselves were super tender. Overall, I really enjoyed Miran.

We visited 3 open markets on our tour: produce, fish/seafood, and meat. At the produce market, we stopped at the olive stand picture above and were able to taste all of the olives. I’m not the biggest plain olive fan, as many of you know, but I tried a few of the different olives. I enjoyed the bright green ones, in the third row from the top on the left. Pretty tasty for an olive. We then just did a walkthrough of the other two markets. Natalie did not like the smell, but I found it pretty cool to see the different seafood and meat! But really, if you’re not buying anything, how long can you walk around in there? We were out within a few minutes. A cool experience though!

Loukoumades, as I spoke about in Part 2, are Greek donuts, and they are great! Fluffy, light, and covered in honey, they are the perfect snack. Definitely worth the calories!

Pantopoleio is a Greek specialty store. They have many organic and hard-to-find items. We got to taste many of their delicious offerings! Obviously, olive oil and feta cheese were a must, along with a glass of a malva/agiorgitiko blend. The wine had quite a bit of tannins, which I didn’t really enjoy. The oil and cheese were great though. We also tried some tomato and caper paste (which was very strong), some cherry vinegars (not a fan of either of those tastes, so it wasn’t my favorite), some thyme and pine honey (would’ve been better without the pine, but the thyme gave it a lovely flavor), some grape spoon sweets (basically a very sweet grape jelly, super syrupy), and to end it all, a spearmint liquor (it tasted like toothpaste liquor, not a huge fan, but it was a palate cleanser). Overall, lots of fun. 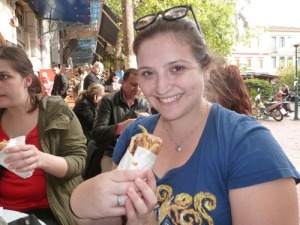 What authentic Greek food tour would be complete without souvlaki? Mine was beef, and instead of the usual tzatziki, it had a spicy homemade tomato sauce. It was a little too much for my taste, but the meat was delicious! Natalie had a vegetarian one, which consisted of french fries and tomatoes.

Overall, it was a great tour! It ended at around 3:00pm, and we were super exhausted from trying all the food. Later that evening we went to our hotel’s restaurant for dinner, as neither of us was super hungry. We had a cool view of the Acropolis lit up at night, and we went to sleep. 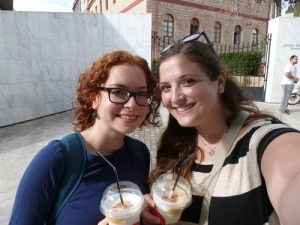 Our last day in Greece 😦 What should we do? Walk again, I guess. We stopped back at “Arcadia,” the restaurant from night 1, to get some Espresso Freddos (cold espressos). They were heaven.

We also stopped back at the koulouri place for breakfast. Amazing.

We went to the neighborhood of Gazi, an up-and-coming area that is known for its night life. However neither of us is a big partier, so we figured we’d check out the area before committing to going there later that night. There wasn’t really anything around there, and the walk was a bit sketchy, to be honest. Our mind was made up not to go back to that area later.

So, we walked back home. It was a leisurely walk through an area we hadn’t been to yet. A lovely discovery. We snapped a shot with an olive tree for good measure. 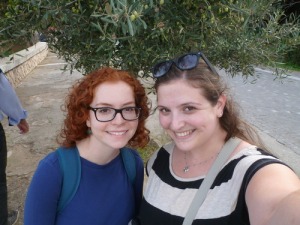 Instead of Gazi, we went to place called Psiri that night, another place known for nightlife. We had our last Greek dinner (well, I had a hamburger stuffed with Greek cheese) and then got some drinks at a nearby bar. I was even approached by a Greek boy and we talked about our love of travel. It was very fun, and a great way to end our trip.

The end of an amazing trip. We flew home on El Al and a large, rude man sat in the middle of us. It was not an enjoyable flight. Then we had to take a train and then take a cab back. It was a big ordeal. The cab driver actually hit on me and it was funny and weird at the same time. He was around 60-years-old. Ugh. Finally, I arrived at home and promptly took a nap. I relaxed for the rest of the day as well.

I hope you enjoyed reading about my Greek travels! I certainly enjoyed living them (writing them, not so much, as it took FOREVER). I promise to catch up as soon as possible, as I finally have wifi again! Hurray! Talk to you all soon!