Going to try to stay as up-to-date as I can on these blogs. Going to try writing after the end of every day, but not uploading until there is a substantial amount of information. Well, that’s how I’m going to try this blog, so let’s see how it goes.

Still really trying to get used to this whole “Sunday as the beginning of the week” thing. I swear, I’m going to forget one of these weeks and I’m going to be late for work… Let’s hope that doesn’t happen. Today began yet another (half) week of Ulpan. Our last one, kind of. We have a few more days in the middle of October, but this is the last week of Ulpan actually being a part of our schedules, as our internships start on Wednesday. Today was a 6-hour day of Ulpan, meaning field trip time. We went to Migdal Shalom, a skyscraper (or as my Hebrew teacher called it, “sky-scratcher”) that overlooks all of Tel Aviv. It also has a museum inside of it. We got to see this gorgeous mosaic done by Nachum Gutman, a famous Israeli artist.

While we were wandering around the museum, a strange wave of exhaustion came over me, and all I wanted to do was go home. It may have had to do with being in Ulpan for the first time in almost a week. It may also have been because our guide for the day was horribly boring. Either way, I couldn’t get out of there soon enough. I came home, made myself some dinner, and caught up on a few TV shows before going to sleep.

Not too much to report about today. Of course, Ulpan. But only a 3 and ½ hour day. Hurray. Oh, it rained a little bit! That was exciting for my Hebrew teacher. He actually let out a squeal of excitement. A 28-year-old man squealing because it was raining. I tried really hard to hold in my laughter. Since we did not have field trip, but we did have an activity later, two friends and I decided to get a late lunch. What were we craving? Thai food.

We headed over to this restaurant that had been recommended to Daniel called “Beit Thailandi,” or “Thai House,” in English. We asked in Hebrew if they had Thai iced tea, a must if you go get Thai food, and the waitress immediately switched to English and said, “Oh, you must be American. They’re the only ones who ask for that. No, we don’t serve that here. It’s not actually from Thailand.” Well, color me surprised. Apparently peanut sauce is also not from Thailand, but from Malaysia…so they didn’t have any. Nonetheless, the food was delicious and I will definitely be going back there! 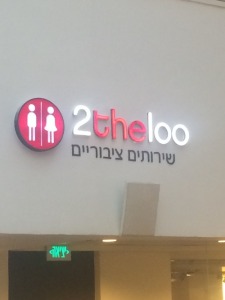 After lunch, we had a little time to kill before our meeting, so Natalie and I meandered around Dizengoff Center, the gigantic mall in Tel Aviv. I will need to devote a post to my fully exploring everything it has to offer, because it will actually take a full day to see everything, maybe even more, I swear. But here, for your amusement, is the sign for the public restrooms in Dizengoff Center. I for some reason find it particularly entertaining. Not sure why. Maybe because it just looks so damn classy? You tell me.

After getting overwhelmed in Dizengoff Center, Natalie and I headed to where our meeting was going to be. We met with a rabbi with a very fluffy beard. He was very….strange. Yes, let’s go with strange. He talked about the concept of God as infinity, and also about relationships and what makes people want to be in a relationship that’s fragile. I wasn’t really listening. The room was dark and it was late. Sorry. I think we were supposed to be talking about Yom Kippur? He did mention at the beginning that it is about one-ness with yourself and actually getting in touch with yourself and your emotions. That part got to me for sure. Then he went on tangents and started pissing people off. It was entertaining, but I was definitely not in the right mindset to be there. Afterwards, I went home, ate my leftover Thai food, became strangely hyper, and went to bed. See? Not much to report.

My last real day of Ulpan! One more day until my internship! So many exciting things! My day started off with the bus I was on breaking down. I had to switch to a different bus, which didn’t go all the way to my Ulpan, and walk through the Shuk HaCarmel. I ended up being 15 minutes late…not entirely my fault, I have to say. So I arrived at Ulpan, and my teacher ended up being sick. The manager of Ulpan taught our class, and she was super nice. I ended up having to do charades while explaining about the field trip we were going on. It was rather difficult, I must say.

We then set off for our field trip to the old train station, a place I’ve been to many times before. Our tour guide was speaking to the lowest common denominator in our group, meaning it was SUPER easy. She asked us how to say the word “to learn” in Hebrew, which is “Lilmod.” Mind you, I’ve literally known this word since I started to learn Hebrew. We were given a set of tasks to complete in our respective Hebrew classes. Since Jess had other things to attend to, it was just Tanya and I walking around this cool shopping area, asking shop owners questions about their lives. It was a little awkward, but a nice way to end Ulpan (well somewhat end it. We have a couple more days in the middle of October).

And that was my day, pretty much. I’m at home now, with a bunch of other people. One of the other (much less nice) apartments is currently being fumigated for bed bugs. What. A. Nightmare. Needless to say, I was extremely fortunate when it came to living situations here. Anyway, the people who live in that apartment are over here right now, so we have a very full apartment here.

I feel like the rest of my night will be pretty relaxing. If something else of interest happens, I will update this particular blog post. So I guess check back in a day or so? My guess is I will probably just go to sleep early, so I’m well rested for my internship! I don’t start until 10, so I can get a little bit of extra sleep. Can’t wait to tell you guys all about it!